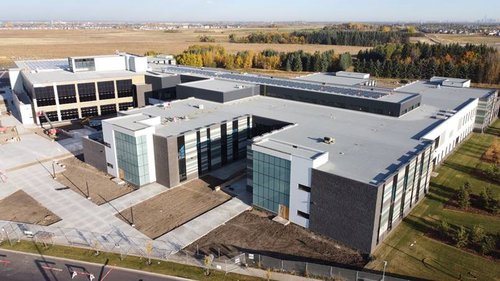 Edmonton will soon be getting a new high school in the southwest area of the city.

Currently under construction and set to be completed in early 2021 for the fall 2021 school year, Dr. Anne Anderson School, named after the well-known linguist, teacher, and writer of the Cree language, will be a Grade 10 to 12 school for around 2,000 students. This particular school is being built using the Integrated Project Delivery (IPD) model, which is an approach that integrates people, systems, business structures, and practices together to harness insights of all parties to optimize project results, increase value to the owner, reduce waste, and maximize efficiency.

This school will be the third project that the Edmonton Public School Board (EPSB) has built using this model. They had built the Mill Creek School first as a trial for IPD and found the process to be very beneficial and appreciated the collaboration between the trades and design groups. “When we did Mill Creek, it was just a test to see what IPD was like. We had heard of this new delivery method, it had been done in Red Deer to build a high school and elementary as a two-school project and the school board was really happy with the success of those schools, so we thought let’s try this,” says Terri Gosine, director of integrated infrastructure services for EPSB. “Our thought was let’s try this more collaborative model. We are a collaborative division where we teach collaboration to our students, so why wouldn’t we try this?”

IPD differs in scope to building in that everyone involved has a common goal of aligning the business interests of all project parties for the success of the project itself. The team works collaboratively, rather than separately, to build the project. This is done through promoting efficiency, open communication, and the sharing of information and joint problem-solving.

“At a normal job, where you bid on the project, everybody and every subtrade in general are butting heads because we want to protect our own profit and we want to be as fast as we can be. It doesn’t matter if we screw somebody else, or hinder them; we want to be as quick as we can be,” says Darryl Wiebe, president of KERR Interior Systems Ltd., the drywall and steel-stud acoustic ceiling contractor on the project. “In an IPD project, it’s just a very different approach where we do what is best for the project. It might cost me more money, but it might save somebody else more than what it is costing me. It’s better for the project, and at the end of the day we are all going to make more money.”

Construction for the two-storey 19,394-square-metre project started in June 2019 and they are set to complete it in the spring of 2021, a few months ahead of schedule. The school, located at 35 Avenue SW in Heritage Valley, will be designed for 21st-century learning and will adapt to the variety of ways that kids learn. It will feature individual learning spaces where students can go and have some quiet study spaces. Gosine says that the school is built around communities, whether it’s having students from one grade together or a group of students based on subject matter. Each community will have washrooms for those students, and teachers will have their own collaborative spaces within there as well, so there is a lot of inter-connectivity between the instruction and socializing spaces.

In the centre of the building is what the architect calls the Agora, which is a student gathering area that focuses on a central fireplace. Around that is a stylized teepee, which is in honour of Dr. Anne Anderson, and each of the teepee poles has Cree language on it that represents things that were important to the namesake.

The EPSB has also collaborated with the City of Edmonton on this building as they have received $5 million to add to the gymnasium space. In that particular part of Edmonton, they don’t have a community centre, so the City gave the school extra funding to add a third gym to the building. The gym will feature a running track around the top of the three gyms, so participants can see down through the running track into each level. This school will be the first one in the district with a running track.

Once completed, the school is aimed to achieve LEED Silver status. So far, construction has been going well on the project and the use of IPD in building it has been very beneficial to all involved parties.

Aaron Giebelhaus, project manager with Clark Builders, says that this is their fourth IPD project. Compared to the traditional method of building, he says that the process for this is different. “One difference from the start is team members coming together early on and working through the validation period. The owner has a budget to work to and the team uses target value design to essentially validate that the budget is suitable to build the scope of work that the client is looking for,” says Giebelhaus, who adds that this is the first IPD project he has worked on. “Team members come together early on and work towards that common goal.”

Giebelhaus adds that there is a significant learning curve in IPD compared to other contract types. He says there are varying degrees of experience on the team, but they all come together to find new and different ways to do things.

Aaron Corser, senior project manager with Clark Builders, adds that there is a great deal of trust and collaboration when working on IPD projects. He says that in learning IPD, there is an increased vulnerability since they don’t have all the answers and don’t know what they are doing all the time. At the same time though, that’s what makes these kinds of projects rewarding. “It’s fun. As a team, you consult the team’s problems,” says Corser. “People quite often will say ‘we did it this way once and it worked, or we tried this on another project’. It’s quite a lot of fun; very little command and control type of approach to either solving problems or just purely managing and executing the work.”

IPD is also beneficial in that allows for a very fluid process of construction administration. Corser says that in a traditional contract delivery model, where everyone is securely siloed with the contractual rights, obligations, and duties, there is a more formalized process in doing things, which can slow the project timeline down. In IPD, all parties are on the same page heading for the same goal. You don’t have the in-depth conversations about whose responsibility it is as it relies on everyone involved. He says that when there is a problem, solutions are often enacted in a matter of days, if not hours, because it’s a very fluid process where everyone is on the same team heading in the same direction. IPD allows for a much more effective flow of work on site, as well as in the design process since it allows them to effectively manage their design work flows instead of going back to redesign if there are any issues.

Although there are a lot of positives in terms of IPD, Corser mentions that there are some negative aspects as well. He says it can be time consuming as not a lot of the construction community is used to doing an intimate high level of detail forecasting in terms of productivity, labour hours, and work flows. He says it’s a skill set that is just being developed and it can look like more work, especially from an administration and project management level. Since there is more transparency between parties, they are all sharing their information at the same time, so there is a lot of management work that goes into it.

Another challenge Corser mentions is that in order to enter into a contract of this type, you have to have the owner embrace it. He says that although IPD has been used extensively in the United States, here in Canada it’s still relatively new. “It’s a new contract; new to lending institutions and new to owners. It does have some inherent risk with it as no one wants to be the Guinea pig, so to speak,” says Corser. “I think there is a challenge in the marketplace, especially in uncertain financial times in taking on the risk of something kind of new… Not to use clichés, but those of us who have drunk the Kool-Aid really don’t want to go back to doing things the traditional way. There are so many benefits.”

With the school nearing completion, Gosine says that the IPD method has been successful and would like to continue using it for projects in the future. This particular project was a big one for the EPSB with the school budgeted at $69,909,397 (with $59,747,137 for construction) and was part of their Capital Plan. The school district is also currently building another school using the IPD method and Gosine says that she would like to continue with this method in the future as well. “I would say the process has been really great and that they are a high-performing team, maybe the most high-performing team we have worked with to date,” says Gosine. “Just the fact that everyone sitting at the table is equal, no one gets more say than anyone else. I really appreciate that piece of it.”