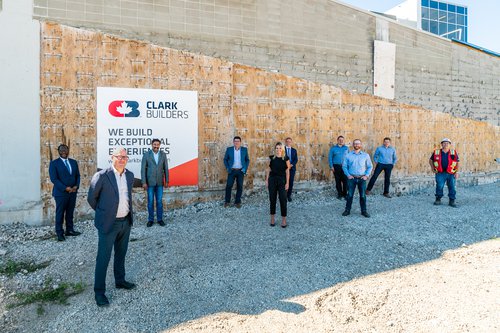 Article by Sean McIntosh for the Red Deer Advocate.

Construction of the new courthouse in downtown Red Deer is set to begin.

The groundbreaking ceremony for the Red Deer Justice Centre, located next to Sorenson Station, was held Thursday afternoon.

The 29,000-square-metre facility will include modern technology. It will include 16 courtrooms – 12 will be fully built for immediate use and four will be roughed-in for future use.

Contractor Clark Builders will begin construction on site in the coming weeks, with completion anticipated for spring 2023.

“It will, without doubt, help alleviate impacts to families in crisis and victims of crime by ensuring more timely access to justice through expanded courthouse capacity,” said Veer.

The government has committed to protecting the Parsons House, a historic landmark located next to the Red Deer Justice Centre at the corner of 49th Street and 49th Avenue, during construction.

The new courthouse project is part of the more than $10 billion infrastructure spending announced as part of Alberta’s recovery plan.

Minister of Justice and Solicitor General Kaycee Madu said the investment in the courthouse is a “direct response to the feedback my ministry received during last year’s rural crime tour,” where the government listened to the experiences of rural Albertans facing a rise in crime.

“The upgrades to the Red Deer Justice Centre will help ensure the justice system is working effectively and efficiently to meet the needs of those in Red Deer and the surrounding communities while making sure the judiciary, staff and the public are safe,” said Madu.